Read more on "Phillip Boykin, You Win the Tony of My Heart" »

Phillip Boykin, You Win the Tony of My Heart 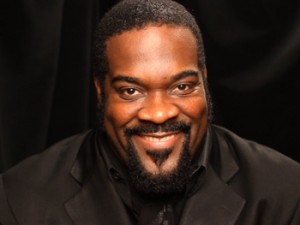 When Audra McDonald won her Drama Desk Award for Porgy and Bess on June 4, she thanked her costars, and spoke of what an honor it was to fall in love with Norm Lewis eight times a week — and be raped by Phillip Boykin. WHICH SOUNDS CRAZY. But. If you’ve seen Porgy and Bess, and you’ve witnessed the performance being given by Phillip Boykin as the mostly-evil Crown, you kinda get it. As the third corner of the show’s central love triangle — it is occasionally a hate triangle — Boykin provokes an incredible reaction. On the night I saw the show, and undoubtedly on others, Boykin was booed during the curtain call. Booed. My first thought? Hand that man a Tony Award like, right now.
Boykin has played this role many times in his varied career, which includes opera gigs in New York and around the world. His Crown is a seething knot of jealousy and anger, as relentless as the hurricane that wreaks so much havoc on the show’s characters. Even with Audra McDonald standing a few feet across the stage, Boykin leaves a stunning impression. No small feat, that. For it, he wins the Tony of our hearts. And we wouldn’t mind seeing him stand up to take the real Tony, either.

Read more on "THE THEATER SOURCE.COM By: Carey Purcell" »

Crown, played by Phillip Boykin, is a frighteningly fierce presence onstage with a rich singing voice to match.

Phillip Boykin is a hardy, potent and terrifying Crown with a voice of booming iron and the malevolent force to enslave anyone within range. When he appears from the swamp after the picnic to rape Bess and drag her back from decency into a life of shame, the scene on Kiawah Island sizzles with the energy of a sexual tango that leaves not only Bess, but the entire audience, limp…

Crown, scarily played by bass-baritone Phillip Boykin, who has one of the most powerful voices heard in some time,

Rather than playing Crown as a charming charismatic playboy, Boykin is so convincing at making Crown brutal and dangerous that it turns Bess into a trapped woman who cannot escape from her fear, attraction or need for him.

Audra McDonald, Norm Lewis, David Alan Grier and Phillip Boykin to pull out all the stops is thrilling theater and should not be neglected.

…the superlative Phillip Boykin as Crown, is outstanding.

Phillip Boykin is a commanding Crown…